I was recently assisting a local builder, Croft View Construction, on a historic structure near Longtown, Cumbria.  The project involved the removal and replacement of a roof from the Grade 2 listed Coach House, at Netherby Hall.  The building had been over-roofed in the 1950’s, covering a large internal gutter and series of valleys.  Once removed, the underlying roof revealed the long term effects of moisture and woodworm ingress to the structure.  Given the listed nature of the structure, and the need to ensure that all works complied with the permits in place, replacement timbers were required to be designed and installed, with the removal of all damaged beyond repair timber and a new lead over-roof. 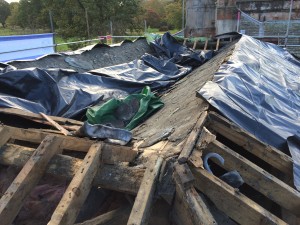 The main issues on the roof where associated with the failure of the over-roof to protect against water ingress and a historic infestation of woodworm.  The main ridge beams had been historically a weak point in the roof coverings and had been exposed over a number of years to moisture damage.  In some locations, damp had penetrated a 150mm oak beam and reduced it to a crumbling mess of shavings. 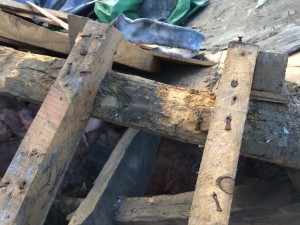 In addition, some elements of the modified roof had been attacked by Woodworm, and although there is no visible signs of any new woodworm activity, some significant damage to timbers would require removal.  It was interesting to note that the original oak pinned frame associated with the roof, had little damage either from water ingress or from woodworm, thus proving that they don’t make them like they used too. 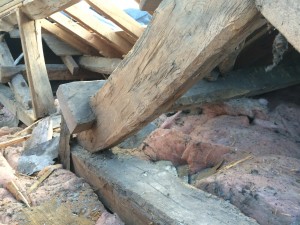 New ridge beams were designed for the Client and with the revised roofing arrangements comprising of a new leaded flat roof over the entire internal area, and beams to accommodate the new loading arrangements.